A much more willing accomplice as the new Director of Public Works. Ernie Purdy was elevated to the Director position. Councilman Frugoli was also on hand to help break in the new Director correctly.

Within a month of taking over the DPW, Purdy had rolled over and built the Councilman his private road at Coquille Beach without so much as a whimper. In fact, the job was done so quietly that it never even generated any official paperwork. No plans were drawn up for the project, and City Engineer Doran was never notified. 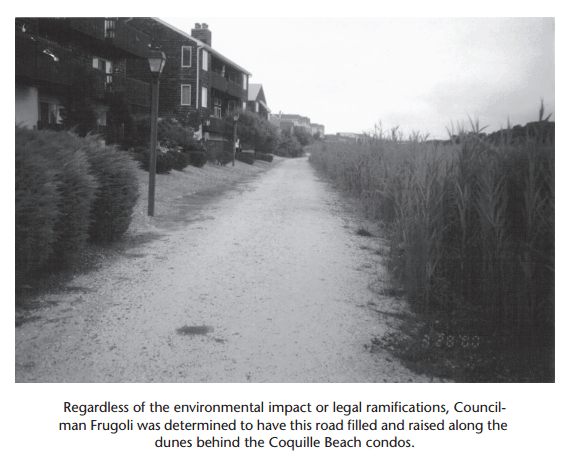 Neither did anyone bother to obtain authorization from the DEP regarding the encroachment onto protected wetlands. In fact, according to Costello, upon further investigation, no DEP permit could even be located for the existence of the entire Coquille Beach condominium development itself!

True to his word, Frugoli also made sure that the dirty fill, consisting of asphalt, broken pipe and other remains of a broken sewer line, was used. The proposed improvement was never presented to the taxpayers, who were nevertheless expected to foot the bill for the Councilman to assure himself the block vote of at least one grateful condominium association.

The project was such a secret, in fact, that the final job was never even inspected. When questioned about these annoying little details, Frugoli dismissed the matter with a very Godfather-like wave of his hand, “It’s a very small town, you know, we don’t have to go into a whole dissertation. It’s a matter of putting the dirt on the ground and leveling it off with a grader.”

More importantly, it was a matter of securing a few hundred votes for the low, low price of some city-owned resources. Soon after, the city began to assert that the Coquille Beach path had existed since at least 1980, and that it was actually an emergency access road maintained by the city.

These statements are patently false, as no alleged “emergency access road” is depicted in any official map of Brigantine. Nor is any such road authorized in any resolution or ordinance ever adopted by the city. Moreover, during his three and a half years as director of Public Works, Costello never once saw this road used by any emergency vehicle, nor did the city or DPW ever maintain it during that time.

This road was actually nothing more than a footpath that was widened and raised.