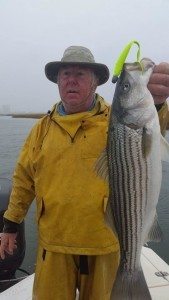 Striped Bass seem to like the 50 degree waters off of Atlantic City and South Jersey.

According to Captain Dave of the Absecon Sportsman Center, he says it’s the best Striper fishing he’s ever seen.

One caveat though, most of the fish are being caught one to two miles off shore. The action in the surf is spotty.