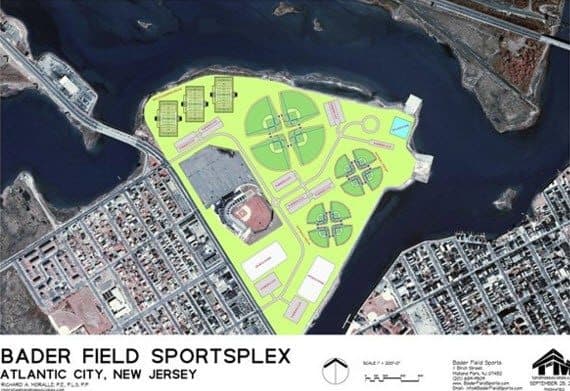 Plans for a Bader Field Sports complex took a potentially fatal hit during this week’s City Council festivities. Seems like the State of NJ isn’t so hot on a measly 10% rev-share, especially on a project that MIGHT attract mediocre jobs and revenue. Oh, and one more thing. The City must have a 60 day out clause, so says Emergency Manager, Kevin Lavin. We smell deal-breaker here.

Instead on voting on the original Bader Field Sports lease agreement on Tuesday November 24, City Council reluctantly introduced a new lease-agreement ordinance to be voted on at a future meeting.

Bader Field Sports LLC planned to build athletic fields on the site of the former Bader Air Field in the western part of Atlantic City.

The updated Bader Field lease terms had council members fuming. Lavin wants Atlantic City officials to have the ability to close down developer Bader Field Sports operation after 60 days, if need be.

George Miller, lead attorney for Bader Field Sports was visibly disappointed at the last minute edict/recommendation. Council members were also dumbfounded, once again having the wind taken out of their sail, their local power usurped. No wonder they’re angry. The state is enforcing it’s growing approval power over a majority of redevelopment project in Atlantic City.