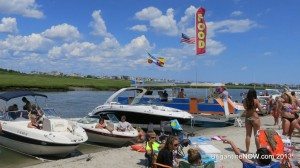 According to the Times: for the past 15 years, the Weenie pontoon boat has been pulling up on the sand to feed hundreds of bare-foot patrons each day. Hot dogs, hamburgers, water ice, even t-shirts. It’s been a beautiful thing.

Inquiries to determine ownership of the Water Weenie over the past decade have been underway since the shutdown. No official statement from City Hall yet. If it’s determined that the Water Weenie has been conducting business on the beach for any length of time, City officials will likely have complete files of the ownership and management of this vending vessel. Requests for past Weenie documentation; mercantile, health, Coast Guard and NJ business are planned for this week.

Everybody loves the Weenie. So why did the City, after all these years of excellent service and yummy food decide to shut them down?

Seems like some weenie-haters phoned in a complaint to Brigantine Police. Same handful that cringe when hearing ice cream bells? The offended individual said people were involved with illegal ice cream sales at the cove, operating from some type of float or as Brigantine Councilman DeLucry aptly described it: “a floating apparatus”.

This head-scratching news comes on the heels of last week’s municipal crack-down on ice cream trucks operated by veterans at the north end seawall and other convenient, safe locations favored by families along the shore line. All of this hub-bub attracted the attention of ace-reporter; Ted Greenberg, from NBC-10 TV. Ted did an excellent story on the safety hazards created by this recent enforcement of a decades old,  parking ordinance that most could never understand the need for. SEE NBC 10 Video Here: Brigantine Ice Cream

Meanwhile, fresh on the job as Brigantine’s new Police Chief, Tim Reed personally responded to “The Cove” area of Brigantine Beach to inspect permits, licenses and other requirements needed to operate a legal business on the beach.

Chief Reed said that neither party on the beach were compliant. They did not have proper licenses to operate within the Brigantine city limits.

It’s unknown if fines were levied and if the Water Weenie will be liable for ordinance infractions from past years.

Chief Reed also said in the Times article: “in order to be compliant and sell any type of food or ice cream at The Cove area, you need a Brigantine Mercantile Permit, an Atlantic County Board of Health Certificate, registration with New Jersey as a business, and a current Coastguard watercraft inspection”. Reed did not share which, if any of these items, the Water Weenie already had in place.

The Brigantine Police Chief is also quoted in the Brigantine Times as saying: “The City of Brigantine did not shut down the Water Weenie or the kids selling ice cream from the raft. We just told them to come back when they’re compliant.“ No word if the Weenie and the kid on the raft will need to bid and pay for proper vending rights (similar to ice cream vets), or if they’ve been granted municipal immunity.

The Water Weenie, a “Cove” favorite for over a decade, made this area overlooking the Atlantic City Inlet enjoyable and convenient for all. Most hope that the “Weenie’ and other vendors / attractions like this, will return, grow and flourish on this island you’ll love for life. [envira-gallery id=”25576″]