There’s a new day dawning in Brigantine. As Election Day draws ever closer, the atmosphere has been growing more and more intense. For the first time in a long time, there is an undercurrent of political awareness and activism on the island. For years, elections came and went quietly since, for the most part, pretty much the same people were in charge the day after elections as the day before. But this year is different.

Skyrocketing property taxes, staggeringly high city salaries, concerns over the handling of the Brigantine Links Golf Course, questionable online activities and growing unease with the day to day management of city operations have put the island’s elected officials under a microscope, and the strain is beginning to show. Mayor Phil Guenther, essentially unopposed for years, has been pounding the pavement, shaking hands and posing for photo ops like a politician who believes he can’t take winning for granted this year. This is a very good thing for Brigantine. Regardless of who actually wins the election, the crown should never rest so easily on the wearer’s head that his or her continued reign becomes a foregone conclusion.

Politicians SHOULD be nervous. They SHOULD have to solicit our support. Fear of being dethroned is all that we can depend upon to keep them marginally honest.

However, it’s not just the politicians who are suddenly feeling the urgency to be more politically active. There has been a huge show of concern by non-resident taxpayers, who constitute approximately 70% of the island’s property owners. The economic reality of the fact that this majority owns many of the more expensive properties and therefore pays a huge proportion of the taxes has finally hit home. These homeowners are starting to wonder just what it is exactly that they are funding, and rightfully so. This has led to an unprecedented wave of interest in the voting rights of part-time resident taxpayers, to whom this is not a popularity contest and who have no hidden vested interest in any particular candidate. They are simply concerned with fiscal responsibility and proper management of the island’s resources. This factor is by far the biggest threat to the status quo.

A large block of newly aware and actively unsatisfied voters may be just what Brigantine needs to shake itself loose from the illusion that this is still the old island and bring home the realization that “old island politics” are not working anymore. Many long-time residents feel such love for their community and cherish their memories of Brigantine so closely that their nostalgia for the island of yesteryear has left them in the unfortunate but understandable position of wanting to cling to the Brigantine that used to be, unwilling to accept the Brigantine that is. Like aging, change is unavoidable. It just happens when you’re not looking.

Resistance to that change by sentimental residents is completely understandable. The emergence of multiple Brigantine-themed Facebook pages shows that there is a new level of political awareness and activity among the local residents as well. Regardless of the views expressed or the level of discourse involved, this is also a very good thing for Brigantine. It demonstrates that residents are aware of the significance of the upcoming elections and have chosen to become involved, rather than sitting on the sidelines and powerlessly watching the parade go by. An engaged citizenry is essential to keeping the political process honest and accountable. The focus of most of these pages on sentimentality and “good old days” photos, rather than timely political issues, illustrates the fact that not all residents are comfortable with the change, or the possibility that things may change even further in the aftermath of the coming elections.

Whatever may happen in November, this will in all probability be a watershed year for Brigantine. There will be more focus on this election than any in recent memory. More people than ever have become engaged in the political process, and many are even making themselves aware of all the facts. The “old ways” are under question and there is more demand for transparency than ever before. All of these factors must inevitably lead to the improvement and evolution of the community.

A change is in the air. The future of Brigantine is happening now.

Patrick Costello is the author of the Brigantine best seller; Greenhead Politics, The Story Brigantine Taxpayers Were Never Told 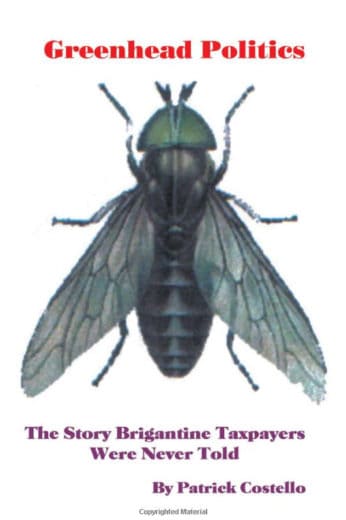 4 thoughts on “Brigantine Election Season. Change In The Air.”