The sign is right. Brigantine really is an island you’ll love for life, especially if you’ve been born and raised there.

No matter its faults, the Brigantine of my youth was always a town full of hardworking folks committed to raising their families in the most pleasant environment possible, and the source of some of my fondest memories. 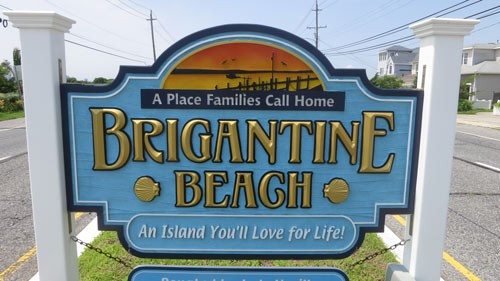 Over the years, the island has of course grown and changed, with a much higher percentage of non-resident taxpayers. However, there does remain a core of longtime residents who still remember the simpler, more idyllic days.

It was with that same spirit that I wrote “Greenhead Politics”. Despite being perceived by some as a negative look at the underbelly of small-town politics, my main intent in writing my book was to turn what had been an overwhelmingly negative experience into a potential positive for the residents and taxpayers of Brigantine. Some might say that one who loved Brigantine would never criticize its elected officials so harshly. I would respond that it was precisely because of my fondness for my hometown that it was impossible to remain silent.

So often, and not just in Brigantine but even on a national level, the government goes about its agenda shrouded in secrecy, while the general populace is so distracted by day-to-day concerns that there is simply no time to delve deeper into the goings on that have such a serious effect on their lives. In my mind, to stand idly by and not at least attempt to make whatever small difference one can is to be complicit in the conspiracy of silence. 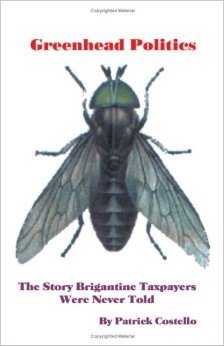 In the interest of fairness, it would be dishonest not to admit that I had personal reasons for writing my book as well. Without rehashing the whole series of events, it does seem appropriate to give the residents and taxpayers of Brigantine further insight as to the process that went into the project. Most readers are familiar with the basic story, which is well-encapsulated on the back cover of “Greenhead Politics”.

“When John Costello was hired as the new Director of Public Works for the small island town of Brigantine, NJ, he was expected to maintain the status quo and enjoy the ride at taxpayers’ expense. Costello instead began an earnest effort to clean up the city, which resulted in an immaculate town filled with delighted residents.

Unfortunately, in the process, Costello also uncovered widespread corruption and abuse among Brigantine’s elected officials and municipal employees. But corruption, theft and municipal misconduct were only the tip of the iceberg. Costello also discovered problems that endangered the health and safety of the island’s residents, only to be ignored by city officials. Not content to turn a blind eye, Costello set about putting a stop to the rampant municipal malfeasance on his own.

But by refusing to play ball, Costello had threatened the power of the ruling elite and suddenly found himself the target of a political lynching. Longtime friends and allies turned their backs as his enemies swarmed. Politicians, city employees and union officials conspired not only to remove the popular Director of Public Works, but also to ruin his credibility in case his allegations became public knowledge. Sensationally accused in the news media of a horrible and bloody crime, Costello was publicly vilified and forced from his position.

In his subsequent whistle blower suit against the city, Costello listed in detail the abuses and corruption he had discovered. When his enemies realized they could not intimidate him with the loss of his position and reputation, they paid John Costello over one million dollars to withdraw his complaint and go away. This is the story that the city of Brigantine paid to keep under wraps.”

As dramatic as all that may sound, the details proved even more alarming. Leaving aside the violations of public trust by city officials and employees for a moment, the vile and cynical use of the tragedy suffered by a grieving family for political purposes was inexcusable. Not only did a cowardly group of guilty parties exploit the grief and confusion of a vulnerable family dealing with the aftermath of a murder/suicide to further their agenda, but they compounded the pain already felt in Brigantine by knowingly casting the blame on an innocent man.

That man was my father. I could no more stand by and watch as a small group of small minds launched a vicious and conscious attempt to ruin my father’s life in order to protect their petty privileges, than I could will myself to stop breathing. Political differences are part of life, as are work disputes. Even a little small-town graft would have been relatively understandable, albeit still wrong.

In the political arena, wrongs are done among the participants every day. It’s a part of the game. However, the depths to which certain otherwise powerless elements were willing to sink made it clear that this was not simply a case of small-town politics gone wrong. This was an offense upon not only the truth but upon my father’s very person, performed with callous disregard for the consequences to him, the victims or the City of Brigantine.

As the results of the lawsuit demonstrate, my father was more than capable of defending himself against the slipshod efforts of his detractors. Of course, my father was compensated monetarily for the damages he suffered, but at the same time, the taxpayers of Brigantine took yet another hit, all the secrets stayed buried, and none of the still very real problems on the island were even addressed.

On a personal level, I also felt that honor demanded that my father’s name be cleared. For all those reasons and more I was compelled to at least attempt to write the book that eventually became “Greenhead Politics”.

It is quite an understatement to say that it is no small thing to write a book.

Like most would-be authors, this was a fact I did not come to fully realize until well into the process. I had always loved books. I was a voracious reader at a very young age, possibly because my parents had discovered that when I was reading I was quiet. I had read literally thousands of books, so how hard could it be to write one? In actuality, it turns out that it’s pretty hard. Even with the mountains of legal documents at my disposal, my familiarity with the facts of the case, and access to interviews with the participants, the work I came to realize would be required was intimidating.

After three long years of poring over depositions, comparing stories, and examining documents…after three years of wearing out highlighters, keyboards, relationships and my eyesight…after three years spent scribbling sudden inspirations on scraps of sheet rock at my day job….I finally received the finished product. The feeling of paging through that first copy was indescribable. For someone who reveres books as much as myself to hold in my hand an actual book that I had written was simply surreal. It was second only to holding my children.

Reaction to “Greenhead Politics” was enthusiastic. Critical reviews were unanimously positive and I was honored to be invited as a guest on several radio shows, including the Don Williams Show. Area bookstores were overwhelmed by demand and requesting additional copies, resulting in frantic phone calls to the publisher on my part. Help came in the form of Mr. Bill Miller, then-publisher of the Brigantine Beachcomber News. Mr. Miller was kind enough to offer his paper’s office as an outlet for Brigantine residents wishing to purchase a copy without the long trek to the mall. His generous assistance in getting the book into as many residents’ hands as possible was invaluable.

Read about Greenhead Politics in Brigantine by Patrick Costello.

Soon after, I was invited as a guest speaker by the Brigantine Taxpayer’s Association. Miss Anne Phillips contacted me with the invitation and requested that I perform a book signing after my speaking engagement. It was a pleasure to be able to personally sign copies of “Greenhead Politics” for residents. It was also quite disconcerting to give a speech in the auditorium of the very same North School that I had attended so many years before, but the crowd was wonderful and my presentation was well-received. During the question and answer period, residents expressed their concerns for their island and were very appreciative of my effort to get the truth to them. No less a notable than Mr. Ed “Scoop” Kay, who served as Deputy Mayor at the time of the case, declared to all present that the events depicted in the book were one hundred per cent factual. To this date, no other Brigantine official has made any comment on the book, or any of the concerns raised by its revelations.

Now, it’s ten years later. A few of the names have changed, but the game seems essentially the same. Greenhead Politics is still the standard operating procedure. Taxpayers, resident and non-resident alike, continue to face drastic rises in their taxes, with no corresponding rise in services. Many locals simply look the other way, so as to protect their business or some relative’s municipal job.

A voice for the little guy is needed. I look forward to providing my perspective to BrigantineNOW whenever invited to do so.

5 thoughts on “Greenhead Politics in Brigantine: A Look Back. By Patrick Costello.”