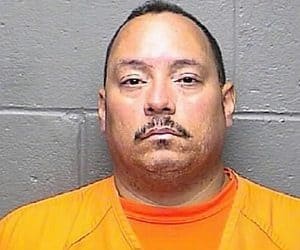 As seen in the Brigantine Beachcomber & Press of Atlantic City  >>

An Atlantic County grand jury indicted Brigantine Police Officer Ralph M. Pereira, 44, of the 5000 block of Ontario Avenue on 10 criminal counts in connection with the sexual assault of the girl in 2012 and 2013.

An investigation by the Atlantic County Prosecutor’s Office Special Victims Unit, with the assistance of by the Brigantine Police Department, resulted in Pereira’s arrest without incident May 19 in Brigantine.

The state alleges that Pereira provided the juvenile with alcohol, committed acts of sexual penetration, and photographed or filmed her in a prohibited sexual act, while he held a position of authority and disciplinary power over the girl by virtue of his employment as a public servant.