According to Brigantine Police: Erik Ireland, resident & off-duty firefighter for the City of Brigantine, rear-ended a stopped police vehicle being driven by Officer Rich DeLeon.

On Saturday, October 25 at 3:58 pm, DeLeon was reported to have stopped for crossing pedestrians at the intersection of Brigantine Ave. & 20th St. south. Officer DeLeon was on duty driving a Police Department Chevy Tahoe SUV.

DeLeon was then struck from behind by a red Dodge Ram pickup truck driven by the off-duty Ireland, who had his two children in the car with him. Both vehicles sustained heavy damage and were towed from the scene. See Ireland’s damaged vehicle below.

Officer DeLeon sustained injuries to his neck and back, and was transported to the hospital for evaluation and treatment.

Erik Ireland told police that he and his children were uninjured. They were transported to the hospital for evaluation.

The accident is under investigation by Brigantine Police Sergeant, Franklin Hewitt. 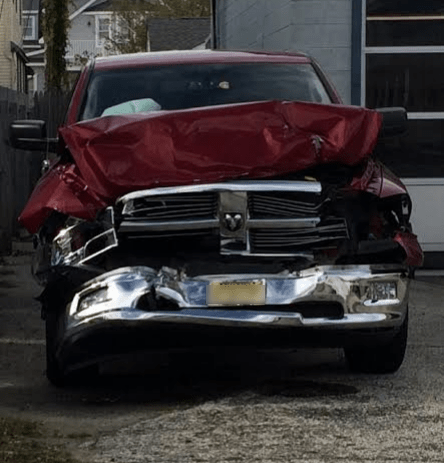