To the editor from Anne H. Phillips >> This letter concerns the ad, paid for by the Brigantine Republican Club, that appeared on Page 20 in the Oct. 31 Beachcomber News stating “The American Legion Riders support Phil Guenther, Andy Simpson, and Vince Sera.”

The article mentions the name “American Legion” and “Legion” three times and includes a picture of the candidates with several League members. Is it just another political ad? No, this one is different. A quick reading of it raises the question of impropriety. A little research on the Internet confirms the suspicion that the ad is wrong. 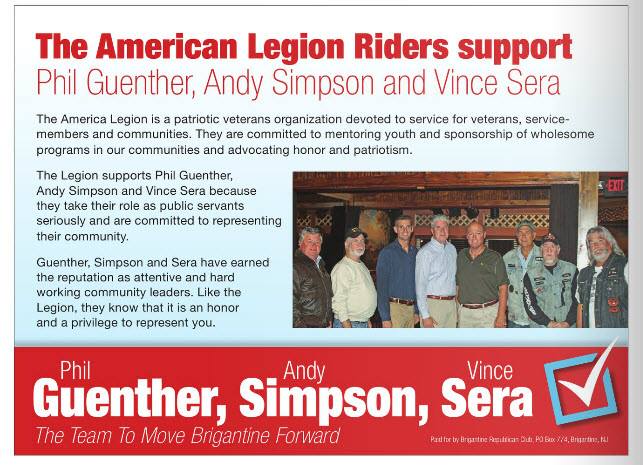 The American Legion was created by an act of Congress in 1919. It is a federally chartered corporation. The U.S. Code, Title 36, section 21706, states that, “This corporation shall be nonpolitical and may not promote the candidacy of an individual seeking public office.” The National Constitution of the American Legion in Article II, section II, states that “The American Legion shall be absolutely nonpolitical and shall not be used for the dissemination of partisan principles nor for the promotion of the candidacy of any person seeking public office or preferment.”

Both parties to this ad are accountable to the public for participating in it. And public awareness of such a deceitful campaign tactic should help to prevent its repetition.