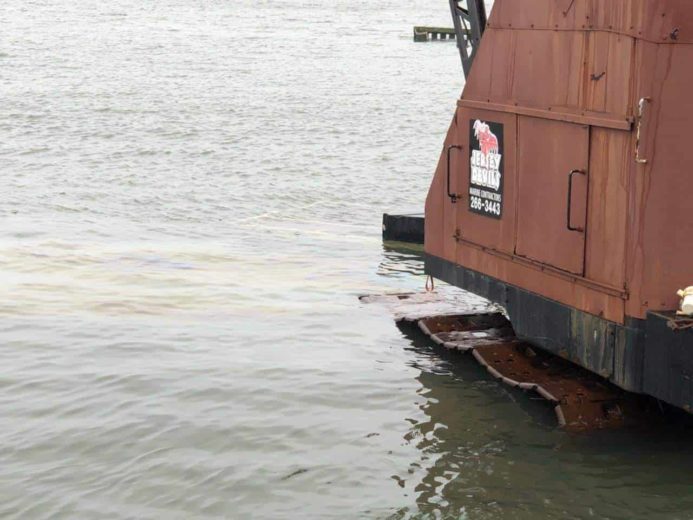 A 22-ton crane once used by Jersey Devils Marine Construction has sat unused for almost a year. Last week, the barge it was sitting on, looked to be sinking in the back bay waters of Brigantine Boulevard.

The DEP says the equipment is not leaking now. It does not present an environmental problem. Last week, when it was slightly submerged after a storm, an oil slick was visible.

Looks like Victoria Delano, widow of Jersey Devils owner Richard Delano, is responsible for removing it.

According to the Press of Atlantic City, Brigantine Mayor Phil Guenther said it’s not a city issue because the crane is in the water.

Some beg to differ with the Mayor. Having an abandoned crane, floating behind somebody’s backyard, is a potential hazard. Kids. Leaking oil. Possibility of falling.

Guenther and Simpson have ignored this crane issue all year.

Oddly, Jersey Devils had used the street end of Laurel Way, at about 4463 Brigantine Blvd., for storing equipment for years.

According to the Press of AC, Homeowners say it’s been an eyesore and a safety problem for at least a year. “this is an accident waiting to happen.” Kids were playing this summer at low tide on the small, sinking barge that holds the crane.

Afraid the tall metal frame would fall onto his Brigantine home

Reader Feedback: Thank you BrigantineNOW for posting about the Jersey Devil crane in the bay. Apparently, many people have been stopping by to discuss the crane and taking pictures. From what I‘ve been told, the owner of Jersey Devils has 2 weeks to remove the crane or could be fined up to $54,000 per day. Not sure when the clock started ticking, or who mandated it. We’ll see what happens. Sad to see Brigantine City leadership drag their feet with this issue for the past year.

Note: Neighbors have NO ill will toward Rick Delano’s good name. He was very well liked and performed fine work. He worked extremely hard everyday.