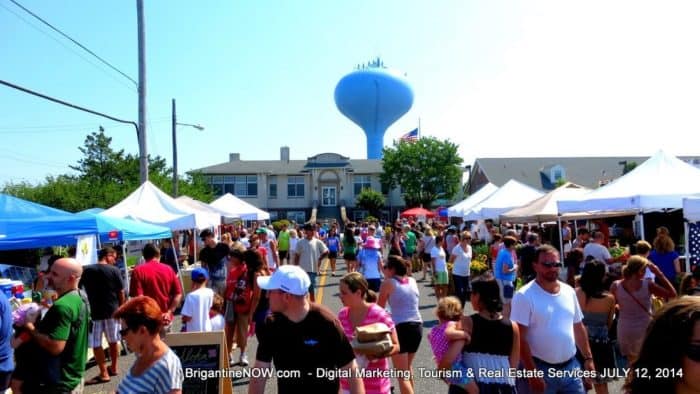 The Brigantine Farmers of 2014 was one of the finest displays of marketing, tourism and entrepreneurial smarts this island has seen in years. The 8 week summer run of the Market was so successful that you knew Greenhead Politics had to eventually rear it’s ugly head and try to muck up the works.

The concept was spawned & spearheaded back in 2013 by Councilwoman Lisa McClay (D) and the Brigantine Green Team. The 2014 market attracted over 80 vendors and thousands of customers during it’s debut season at 15th & Revere, just in front of the library. With the help of market manager John Marinelli and a cast of amazing volunteers, visitors traveled quite a distance to buy fresh produce, delicious treats, ‘green’ products…and to enjoy music, demonstrations and plain ole community fun.

The Mayor of Brigantine (R) was seemingly not impressed, or at least he muted his enthusiasm quite a bit. You see, hizzoner (22 years in office) is being challenged for the Mayoral throne this November by Ms. McClay (D). Can’t have an opponent be attached to that rare Brigantine tourism success… can we?

Mayor Guenther is not the only one pretending the 2014 Summer Brigantine Farmers Market was little more than a half-baked flea market. The Brigantine Chamber of Commerce has also ignored these non-partisan, yet amazingly popular tourism efforts.

Maybe the Chamber is jealous? Shouldn’t the Brigantine Chamber have been doing stuff like this all along? That answer is yes.

The “squashing” doesn’t stop there. City Manager Blumenthal has strangely allowed an ‘unknown’ webmaster to control, edit, add or delete at will, many of Brigantine’s events and tourist destinations.

This chronic breach of City web & communications security has stumped all of Council, and the Mayor too. Somebody has the user names & passwords. Will the City Manager be pressured into finding out who has that access?

To date, nobody on Council seems to care…or…nobody wants to try and identify who the stealth web geek is. Based on the contract between the city & SJTP, we see no identification of a SJTP employee posting info for the city.

Will this mystery one day be forgotten? Stuff like this could certainly contribute to the eventual collapse of another valiant effort to re-invigorate Brigantine’s tourism economy.