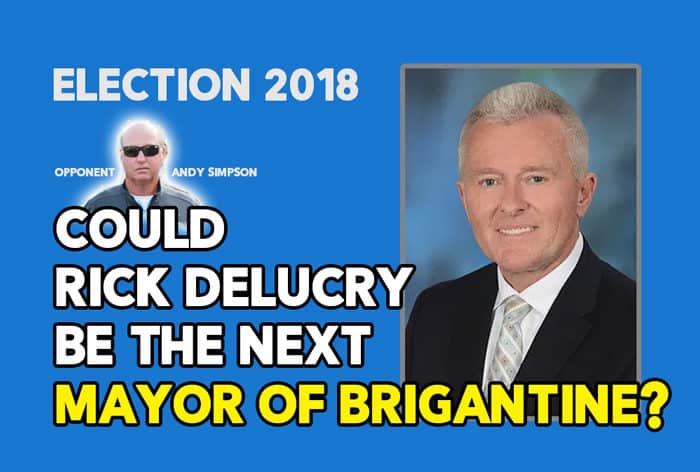 Lifelong resident and veteran Council member for the past 7 years, Rick Delucry, is finally running for Mayor of Brigantine. Delucry will battle Councilman Andy Simpson in the upcoming November election, both looking to fill the seat of exiting Mayor, Phil Guenther.

Delucry, arguably one of the more able and respected members of Council, is a Democratic stand-out on an island considered a GOP stronghold. BUT, that GOP hold on Brigantine could be showing signs of cracking.

Most Brig Dems on Council come and go quickly over the years. But, Delucry has accomplished what many other Brig Dems have not. Longevity in office and respect.

Delucry often reaches out across the aisle, something rarely seen on the GOP side. Privately, a few Republican Council members praise Delucry for his balanced approach on tough issues. Even dyed-in-the-wool Republican residents in Brigantine see Delucry as a very strong contender in the upcoming Nov 2018 election. A contender that could inject a fiscally conservative approach to Brigantine’s finances and operations.

One particular Brigantine Republican that won’t be singing Delucry’s praises is Councilman Andy Simpson. He wants to be Brigantine’s next Mayor too.

It won’t be a cake walk for Simpson. He’s just not as well-liked as the current Mayor, Phil Guenther. In fact, Simpson seems to be more feared, than respected, by city employees. Maybe City Manager Stinson was happy to escape the discomfort of reporting to Simpson? Lot’s of anecdotal evidence to defend that statement.

Why did Brigantine Mayor Phil Guenther decide to hang it up? Good question. Maybe Phil simply realized the party was over?

A few educated guesses why Brigantine Mayor Guenther is stepping down:

Rick quote: Never forget that Council makes decisions with other people’s money. Residents trust us. Taxpayers count on us to do what’s fair and best, for the entire City of Brigantine.

16 thoughts on “Could Rick Delucry Become The Next Mayor of Brigantine?”