WATCH VIDEO >> Past Brigantine accounting practices are coming under intense scrutiny as ‘Cash Management’ takes center stage. A so-called cash management plan was strongly recommended by the city auditor at the last city council meeting. Presumably, pressure from the State of NJ is forcing towns like Brigantine to comply in order to avoid negative consequences.

City Manager Blumenthal suggested that the city did have a procedure, but was never formalized, going back many years. A recent audit of city finances has piqued the curiosity of taxpayers, in addition to council majority.

Can Brigantine account for all expenditures from past 10 years?

Example of sloppy accounting from August 2009?

In other Brigantine City Council news from September 17, 2014 …

After a private executive session, it was announced that the city is thinking about buying some land / property. More details within 45-60 days.

City manager Jennifer Blumenthal discussed issue of abandoned homes in Brigantine, another post-Sandy problem. City has budget of $75,000 for demolition of such structures. Demolition would cost between $8,000 and $12,000 per property. It was agreed that properties needed to be prioritized based on state of disrepair and threat to public safety.

Some within City of Brigantine growing concerned about part-time residents exercising legal voting rights? (See Below)

A public notice was buried in the back of the local paper this week. The legal notice seems to be in conflict with what we have seen on the State of NJ website. But hey, no worries. You totally trust a very, very, very, very, small group of people making decisions for you…. right? 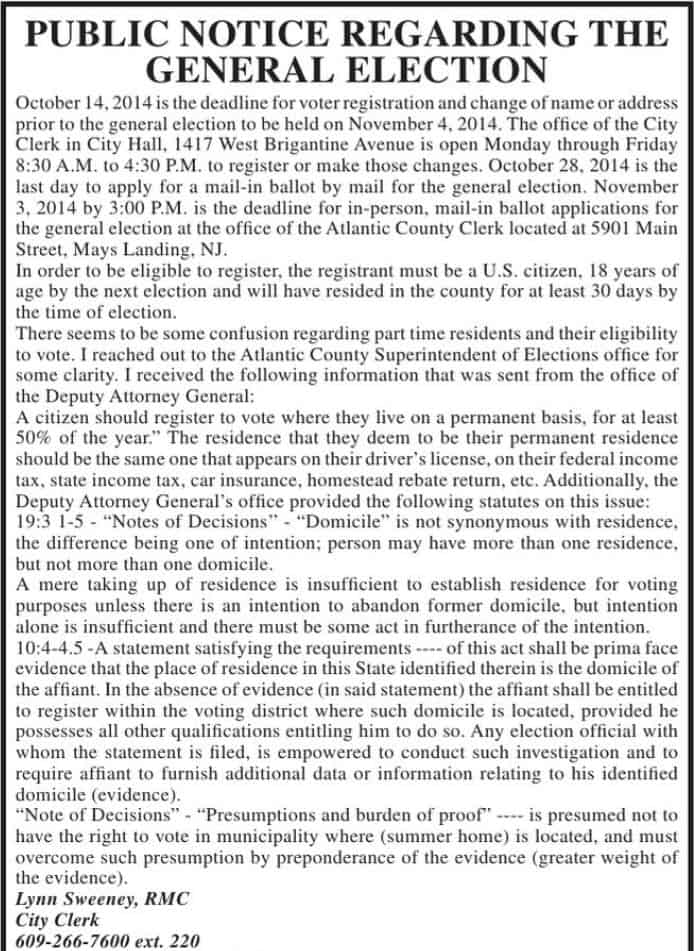