Will the Links at Brigantine Golf follow in the footsteps of Egg Harbor Twp’s City golf course? Let’s hope not. On Jan. 7, Harry Hurley from WPG Radio 1450am had Mays Landing Country Club owner Jim Fraser in the studio. They were talking about the questionable activity going on at EHT’s McCullough Emerald Links.

Fraser talked of his struggles with competing against this public course paid for by taxpayers & named after the EHT Mayor. Egg Harbor Township also runs the course as a non-profit. Conflict of interest accusations are being leveled against EHT Mayor McCullough.

HURLEY: there needs to be a full blown forensic audit.  LISTEN >>>

Fraser mentioned Brigantine too, suggesting The Links at Brigantine should avoid the non-profit route. (Mayor Guenther & Andy Simpson may be considering non-profit plan for ‘The Links’)

Editors Note: Mr. Fraser is not equating the officials in Brigantine with the EHT leaders. Fraser doubts that Brigantine Mayor would make himself president of the non-profit and the city administrator the treasurer of the course.

Some Background: Brigantine Mayor Guenther & Councilman Simpson have shown interest in taking The Links down the non-profit road. Brigantine’s recent Democratic council majority promised to clean up the Links financials for the past two years, but never pulled the trigger. The Democrats also failed to take advantage of substantial interest from golf management experts; Jaworski Golf. To date, Guenther & Simpson have avoided serious engagement with Jaworski. Local newspapers; Brigantine Times and The Beachcomber have conspicuously ‘missed’ or downplayed this major story.

Discussion from the show:

Fraser also said.. in reference to Brigantine:  ‘what concerns me….is when a city establishes a non-profit…..that’s a recipe for shenanigans’. Examples: city does not have to report details to tax paying public….does not have to pay prevailing wage, etc.

All of this chatter got fired up after a simple Facebook post by Mr Fraser on Jan 2, 2015. 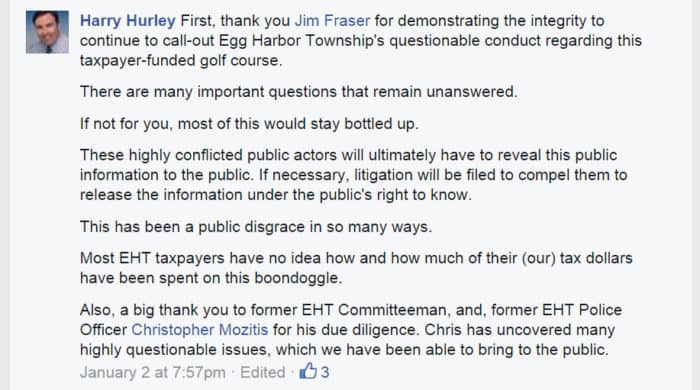 2 thoughts on “Should Brigantine Go Non-Profit with Golf Course?”