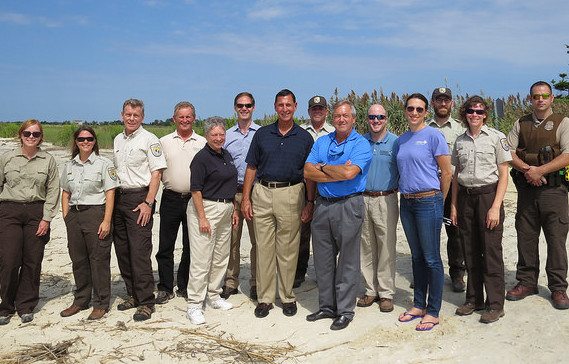 Congressman Frank LoBiondo joined with colleagues to launch the Congressional Coastal Communities Caucus, a bipartisan group designed to highlight the unique concerns of those that live, work, and do business along America’s coasts. The New Jersey lawmakers, who both represent parts of the Jersey Shore, will serve as Co-Chairs of the caucus.

Congressman LoBiondo: “Living and working along America’s coastlines entail unique challenges that much of the country and our many of colleagues in Congress do not recognize. From shore erosion and flood insurance to seasonal tourism and fishing catch quotas, residents of the Jersey Shore and Bayshore face a wide-range of federal policies from Washington that could negatively impact their livelihood. I’m pleased to partner with Congressman Pallone and our fellow coastal representatives on behalf of the residents and businesses that call our coastlines home.”

LoBiondo; a resident of Ventnor City is an advocate for the Jersey Shore, which serves as an economic engine for the state.

The Jersey Shore is home to over $700 billion in coastal properties and a tourism industry that generates $38 billion a year and directly supports almost half a million direct and indirect jobs, or nearly ten percent of the state’s entire workforce.  New Jersey’s vibrant commercial fishing industry generates over $7.9 billion annually and supports over 50,000 jobs. The state also has one of the largest saltwater recreational fishing industries in the nation.

The Congressional Coastal Communities Caucus will elevate the particular interests of the nation’s coastal communities and will serve as an arena to share information, advocate initiatives, and work together on behalf of constituents who live, work, and vacation on our coastlines.  Congressmen Pallone and LoBiondo joined three other Republicans and three other Democrats, who represent the Atlantic, Gulf, and Pacific coasts, to lead the caucus.