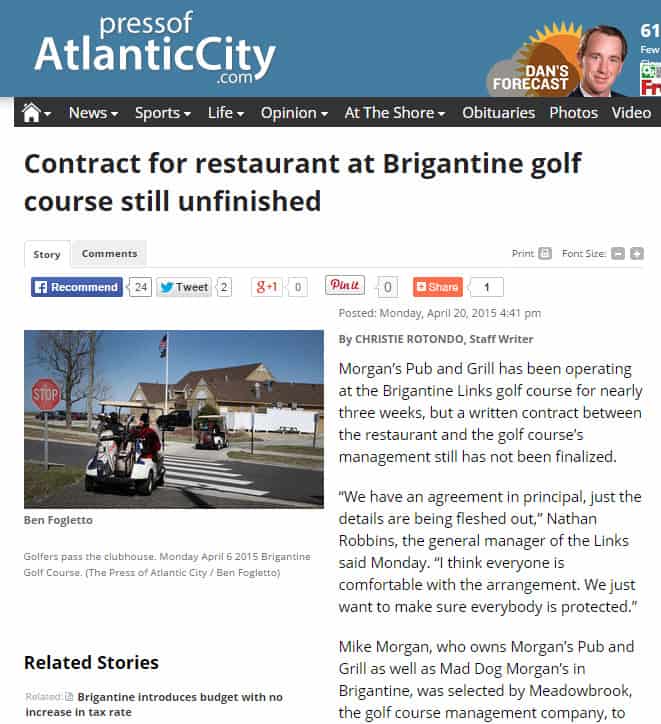 BREAKING NEWS in PRESS OF AC > Our summary of the Press report: Morgan’s Pub and Grill operating at Brigantine Links golf course for nearly three weeks with no contract….and no liquor OK from NJ state?

At the recent council meeting, Rick Delucry asked for copy of draft agreement. City solicitor Fred Scerni has yet to provide copy to Delucry as of Monday.

Question: Why is Scerni brokering deal between 2nd & 3rd party? Why are Brigantine taxpayers paying Scerni to assist in this deal?

Jim Fraser, owner of the Mays Landing Country Clubs says: Concessionaires liquor licenses were never meant for golf courses. But smart lawyers figured out a loophole so now locally McCulloughs Emerald Links and Brigantine Links both have one. You can’t blame the private business people for taking advantage but it’s obvious Brigantine has handled this very badly. If a taxpayer wanted to file a protest with the ABC, Mr. Morgan could be held up for a very long time. If he is in fact getting any income from liquor sales, which Meadowbrook says he is not, the city could be fined and or possibly lose the right to the license. At the end of the day, these licenses are a way for government to unfairly compete with private businesses.

The NJ Division of Alcoholic Beverage Control spokesman Zach Hosseini said the application for Liquor permit to be transferred to Morgan had also not yet been submitted to the state.

Some interesting things to note:

Permit applicants are subject to an extensive review, including a lengthy background check and a review of the applicant’s credentials. READ FULL STORY in Press of AC >

2 thoughts on “NJ Says Mad Dog Has Not Filed for Liquor Sales at Brigantine Links Golf. License at Risk?”