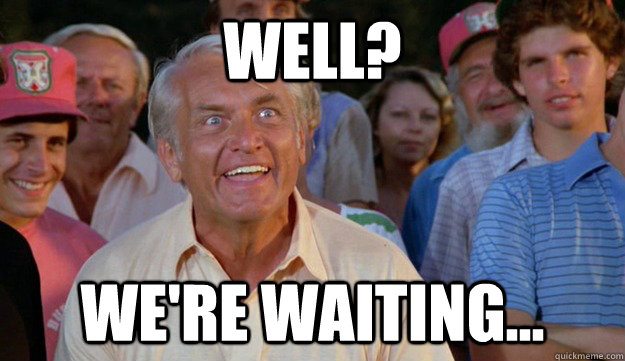 As the demand increases for an agreement to be reached with Ron Jaworski Golf to take over operations of the Brigantine Golf Links, residents have been asking Mayor Phil Guenther one question: What’s the hold-up?

The mayor has shown himself to be adamantly opposed to the deal, which would greatly rejuvenate the declining revenues of Brigantine’s golf course. In 2007, revenues were tabulated at over $2 million. Compare that with 2013, when that number dropped to $900,000, and it becomes clearer why the city required an additional infusion from taxpayers to the tune of $765,000 to make up the difference. Without question, the deal with Jaworski would immediately pump life into the Golf Link’s sagging revenue stream.

With the introduction of an experienced management team, the quality of the course and facilities would be improved, plus, the burden on the taxpayers to maintain the property would be almost, if not totally, eliminated. This would be an excellent way to start living up to those campaign promises to lower taxes.

The association with a big-name entity such as Ron Jaworski Golf would raise awareness of the island and add it to the list of attractions Atlantic City hopes will breathe new life into the area’s failing economy. What better way to “grow the brand” of Brigantine than to partner with one of the biggest and most respected names in the business? Jaworski is a master of marketing and promotion, and would bring all those talents and resources into the service of the Brigantine economy.

A big-name golf course would draw in tourists visiting Atlantic City and other nearby attractions. This would lead to improvements in infrastructure, allowing more traffic to the island, which could certainly give a much-needed boost to local businesses. In all probability, a significant number of jobs would be created, as well.

With new management on-site, renovations and enhancements would probably need to be made, and the entire facility would need to be fully staffed. The presence of a legitimate tourist attraction could also drive up property values, while relieving the tax burden. It’s hard to imagine circumstances in which this would not help Brigantine residents.

Another potential benefit to the Jaworski deal is that residents could be more confident that the Brigantine Golf Links was being utilized in the most fiscally responsible way possible. A corporation that specializes in the business of golf would immediately audit and review the financial aspects that have been concealed from view for far too long. Corporations have stockholders to whom they must answer, so the present secrecy and refusal to discuss the subject would become a thing of the past.

In addition, vendor deals and partnerships would no longer be dictated by favoritism or political partisanship. Jaworski would almost certainly be an excellent goodwill ambassador for Brigantine, but more importantly, this deal would signal the beginning of a move forward for the entire community, into a more prosperous and united future.

Even if we set practical matters aside, considering Brigantine’s close proximity to Philadelphia and residents’ fanatical devotion to the Eagles, the Jaworski deal practically makes itself.

However, a few, most prominently Mayor Guenther, have turned a deaf ear to the litany of benefits the deal with Jaworski would bring to the community. Many residents have been left to wonder what the downside of the deal could be. Since the mayor himself is unwilling to discuss the issue or give his reasons against it, it is left to us to speculate.

There are some who say that Brigantine’s government has no intention of surrendering one iota of control over the use and management of the Golf Links, no matter what the potential advantages to the island. Others bring up the convoluted wheeling and dealing that has gone on in the past regarding the property’s liquor license. While only theories, these lines of thought merit exploring.

Obviously, financial disclosures would have to be made in advance of the deal. Jaworski’s team of experts would probably be required to review the city’s books and previous business-related policies. Uncomfortable questions could be asked. Embarrassing details could become public. Political patronage and sweetheart deals could be curtailed. None of this is on the mayor’s agenda for the upcoming year.

Unfortunately, a failure to publish a timely public notice by the City Clerk’s office led to the postponement of the meeting which could have finalized the deal. When delayed for long enough, everybody knows that deals fall apart all the time. Since posting public notice ads is one of the City Clerk’s most routine duties, it does beg the question of how conveniently timed this mistake was.

While it is absolutely possible that this was an innocent clerical error, it is not unfair to ask the age-old question: “Cui bono?” If the mayor is determined to derail a deal that could bring untold benefits to the residents of his town, and the meeting to seal the deal is delayed by a “whoopsie” by a city employee, who benefits? Certainly not the taxpayers.

Only time will tell what the future holds for the Brigantine Golf Links. It can be the start of a glorious new era of advancement for the island as a whole, or it can be a declining relic, symbolic of the “business as usual” mentality. Residents, local business owners and the City Council majority have expressed an emphatic desire to see this deal go through.

Significant downsides to the deal have yet to be revealed. Yet Mayor Guenther remains doggedly opposed, no deal has materialized, and the Brigantine Links continues to languish.

11 thoughts on “Par For The Course. Why is Mayor Against Jaworski Golf Deal?”