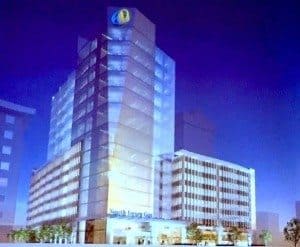 Will Stockton University finally have an island campus on the Atlantic City Boardwalk? At one time, Showboat was pegged as the new school building. But due to the insanity that was AC for the past few decades, conflicting deed restrictions screwed up Stockton’s $23 million deal for Showboat where it was to open an Atlantic City campus.

Today, plans to build the college campus on the other end of the Atlantic City Boardwalk seem to be taking hold.

Christopher Paladino of the Atlantic City Development Corporation (ACDEVCO) said plans are underway to build an Atlantic City campus for Stockton to open Fall 2018. ACDevco will team up with Stockton, South Jersey Industries to bankroll the $200 million project.

The campus will be built on land owned by ACDEVCO.

The campus will be situated near Albany Avenue in Atlantic City’s up-n-coming Chelsea neighborhood.

500-students will be housed in a dormitory with ocean views on the former site of Atlantic City High School. Paladino said it will also feature academic buildings, a parking garage, and new offices for South Jersey Industries.

Stockton will pony up $18 million. $17 million will come from the CRDA; Casino Reinvestment Development Authority.

ACDevCo will borrow $83 million, and will pay it back with projected revenue from student housing. $40 million in tax credits from the N.J. Economic Redevelopment and Growth Project are also being requested.