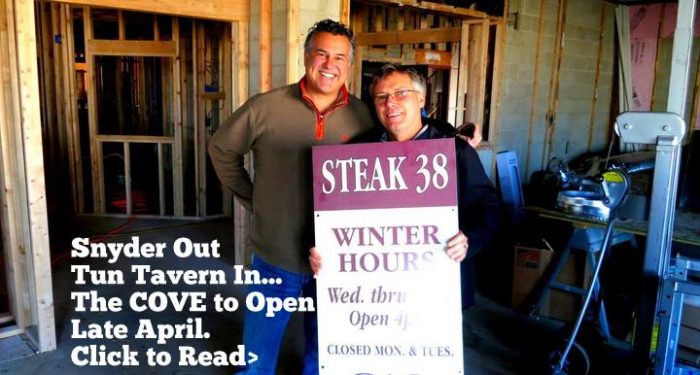 Steak 38 in Brigantine shut down over 6 years ago due to the decline in year round population. Others suggest it was due to big competition right across the bridge in AC.

As some Brigantine restaurants are either shuttered (La Aragosta), or up for sale (Pirates Den, Crab Shack), to say Brigantine is quite happy to welcome a new eatery in town….would be an understatement.

Good thing some smart people decided to ignore Brigantine Councilman Simpson’s statement; ‘you can’t make it here in Brigantine’. In late April, the old Steak 38 property at 37th & Brigantine Blvd will be re-opened as ‘The Cove’.

A few years back, the run down, 2 story Steak 38 property was purchased by the team of Real Estate developer Mike Snyder & money man/partner; Jack Scheurich. Snyder started the construction overhaul last year looking for a Summer 2014 opening. Due to alleged legal issues. Snyder was unable to open The Cove and had to put the project on hold.

Recently, Snyder decided to step away. Soon after, Monty Dahm; owner of the Tun Tavern in Atlantic City took Snyder’s place in the partnership featuring the deep pockets of Scheurich.

70 positions are up for grabs with a job fair to be held at the Brigantine Community Center 10 a.m.-2 p.m. Monday, March 30 and 3-7 p.m. Tuesday, March 31. The Cove is looking for waiters, bartenders, cooks, busboys, etc.

8 thoughts on “Tun Tavern Buys into Steak 38 property. THE COVE to Open in Brigantine.”