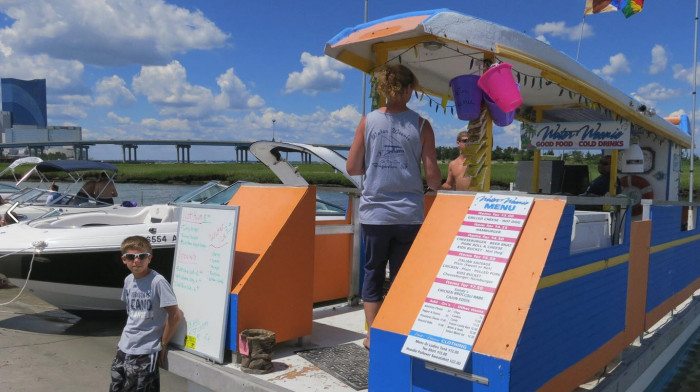 It’s being called Weenie-gate. Most of Brigantine knew the very popular ‘Water Weenie’ food vendor was operating on the Cove beach for the past 10 years. Waiting in line for one of their tasty hot dogs or maybe a water ice was a summer tradition. So, was the Mayor and City Hall in the dark about this brightly colored and flagged pontoon boat was parked on our beach for the past decade? Who owns it? Who manages it? City Hall should have all of that paperwork available. We assume Jim Barber; the past City Manager/Public Safety Director, would also be able to provide some background into this operation.

The recent Brigantine Water Weenie shut down (READ MORE) is another murky question mark that Brigantine residents are all too familiar with.

Brigantine picking winners & losers when it comes to operating a business?

The BB-NJ Business Directory is another recently discovered example of questionable use of valuable taxpayer assets. This Brigantine Business Directory web page is supported by City Hall, paid for by tax dollars, but still not technically owned by City of Brigantine. BB-NJ stills seems to be promoting business without requisite Brigantine mercantile licensing. And just WHO gets to choose the businesses that get on that site?

Eric Matuzsan The Weenie Boat did not have to pay that crazy ice cream fee because as the Brigantine’s Mercantile Office said they were not selling in Brigantine because they were in the water and therefore excluded.

Jack Webster Being on this island since I was a kid (1962) I have seen a lot of things come and go along with political parties. From the “good ole boys” club to the “I don’t know what the hell” is going on club. Remember people, membership does have its privileges! Us locals aren’t as stupid as you think.

Sam on Beach  Just wondering – did the Weenie sell food cash only? Did they give a receipt showing 7% NJ sales tax? Did they have their health cert posted in view as required by law? Lot of crybabies whining about them being gone, but if other businesses have to comply with certs, licenses and PAY taxes..(on ALL of their sales) then the Weenie should too.

Phil Babilino If they simply undocked off the beach and had people have to swim out to them there shouldnt be a legal issue. But since they actually beach the craft makes it hard to oversee that. As far as a low tide mark i wonder if that really is true in this case.

Pamela Jeanne  Have utilized the Water Weenie all 15 years! I miss it, as do our friends and children. That boat is cleaner and staff friendlier than most restaurants.

Alexandra Polillo Why should the Water Weenie not have to comply with the same health codes and certificates as any other business? Allowing them to operate was not fair to other local small businesses. Yea, they were a great attribute to those who frequent the cove. But no business should be favored over another. This is what the people of Brigantine should want- Equality!

Scott Lakernick Truth be told, if the weenie does not comply with state and county health care ordinance, they should be compelled to do so. It’s not difficult to submit for health code inspections to insure the health and quality of the food they serve. All other food distribution establishments must be compliant, why not the Weenie. If they just sold frozen ice cream, I wouldn’t care, but they cook and serve raw food. This is why we pay taxes for a Board of Health.

Amelia Ranieri Brigantine politicians are so worried about selling ice cream on the beach (a normal event in most shore towns) GET REAL BRIGANTINE CITY COUNCIL: Your focusing on killing all revenue producing businesses on the island which you seem to be great at. You even managed to make Brigantine hit the Philadelphia news on TV in an unfavorable light. Seems to me you’ve got destruction of this beautiful island on your front burner.