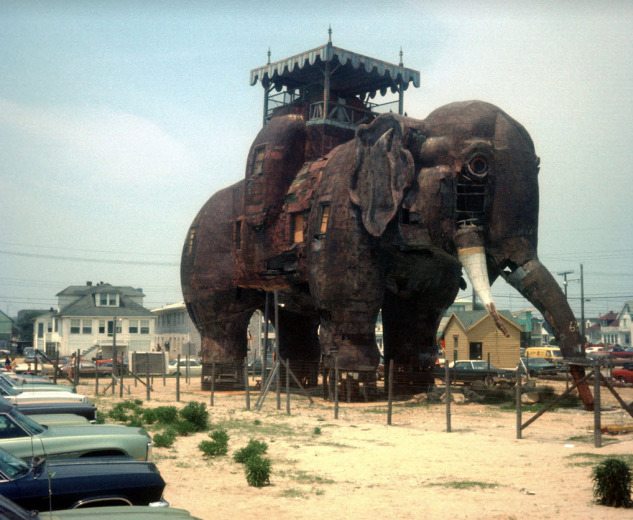 Even with the best beaches in South Jersey, along with prime property, safe streets and easy access to Atlantic City, Brigantine is still looking for a retail & tourism rebound. Maybe a Margate elephant could teach us a thing or two?

From Kevin Fortuna and Harry Sweeney, as seen in POP DUST >>

In 1881, eight years before the completion of the Eiffel Tower, a real estate entrepreneur named James Lafferty built a six-story high wooden elephant on a deserted stretch of barrier island beach just south of Atlantic City, in southern New Jersey.

Lafferty’s goal was simple. He owned a lot of nearby land and he needed a gimmick to attract potential buyers. The gimmick was Lucy, the Margate Elephant.

Ninety years later, Lucy was a tattered, wasting-away wreck, when two local ladies undertook her restoration. They raised $25,000 with cookies and bake sales to move the building from the ground it stood on behind a local bar to a public park next to a hot dog stand. One day shortly afterward, they approached a local advertising man and said “We need advertising help.” “What for,” he responded. “To save Lucy,” they said.

“It seems that a private school in Connecticut needed to renovate a building, but they didn’t have the funds. They had plenty of local connections, but no money. So some clever parent came up with the idea of approaching a friendly bank for a loan, having each parent family co-sign the loan for a thousand dollars and agree to pay the annual interest until the loan was repaid by the school. The school got the money they needed. The kids got a renovated school. And, the parents got a tax deduction for the interest they paid and the warm feeling that they’d done something good for the school. So, let’s do the same thing here.

This all took place in the early 1970s when Atlantic City had hit rock bottom. As viewers of HBO’s Boardwalk Empire know, this wasn’t the first time; Atlantic City’s roller coaster economics have been a topic of fascination since its founding. But this time, a perfect storm of negative events had caused its convention and tourism business to collapse and casinos were only a dream on the horizon. The first  casino referendum failed, but the second one passed. The campaign promised the moon to local supporters, but for nearly forty years casino owners focused mainly on delivering point-to-point visitors to their fortresses, which were consciously built to diminish the natural attractions of the island.

3 thoughts on “What Lucy The Elephant Could Teach Brigantine”