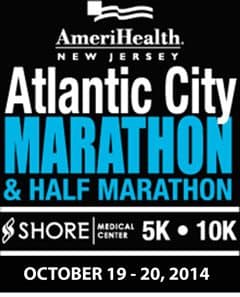 ATLANTIC CITY – Over the past 56 years, the Atlantic City Marathon has become an Atlantic City icon as the third oldest marathon in the United States. Annually the race attracts thousands of runners from all 50 states, Washington, D.C., and 14 countries around the world.

More than 3,500 runners are expected to participate in the entire weekend of events, which will include the Shore Medical Center 5K and 10K Saturday, Oct. 18 and the AmeriHealth New Jersey Marathon and Half Marathon Sunday, Oct. 19 on the boardwalk in front of Bally’s Atlantic City Hotel and Casino.

Mara Justine of Galloway, one of the performers on Season 9 of “American’s Got Talent,” will kick off the event by singing the national anthem.

The Shore Medical Center 5K and 10K will take place Saturday on the boardwalk starting 9 a.m.

The start time for the marathon and half marathon is 8 a.m. The marathon runners will run a 26.2-mile USATF certified course that travels through the scenic streets of Atlantic City, Ventnor, Margate and Longport, beginning and ending on the boardwalk of Atlantic City.

The various distances offer a race for runners of all fitness levels, according to organizers. The race course and amenities including Gatorade, Powerbar Energy Gels and water.

For those looking to break a personal record or maintain a specific pace, the Cooper University Health Care Pace Team is a free resource that can help with meeting goals.

Along the route, runners and spectators will hear variety of live bands and disc jockeys during the two days of racing. The live band element, which was added in 2012, will return this year with local radio station 95.1 WAYV and its sister stations hosting local musical talent throughout the race route both days. Key locations to view the race and listen to music include Steve & Cookies by the Bay on Monroe Avenue in Margate, Harry’s Oyster Bar & Seafood on the boardwalk, and Kelsey & Kim’s on Melrose Avenue in Atlantic City.

The Atlantic Care Finisher’s Village will be open both days to runners and spectators at Dennis Courtyard on the Boardwalk in front of Bally’s Casino and Harry’s Oyster Bar & Seafood. Runners will receive food and refreshments and a Corona Light for their participation.