Cathy from Bayside Marina reports that the wind has been ridiculous, but hasn’t stopped fishing especially in the back. Stop in Bayside for your Atlantic County Derby permit and drive the front beach with a valid 4×4 pass. And….sign up for the Bayside Bounty for $5 surf or boat.

Bayside’s Eric Matuzsan won the derby’s weekly prize last week with a 4.1-poung tog caught on green crabs. Although you can only keep one right now, anglers are crushing them at low tide. There are also triggerfish and croakers being bagged on pieces of clam.

Plenty of blues are blanketing the waters. Kingfish are playing hide and seek; one day they are fat and everywhere, the next day gone. A lot like finger mullet lately, but I heard of big schools of mullet heading down from up north, so the mullet run is not over. And hopefully bigger stripers under them.

Some stripers are being caught at night, with eels by boat or the Daiwa SP minnows off the surf.

Don’t forget to mark your calendar for Nov. 21-23 for the American Legion’s Fall Striper Shootout to benefit Fisher House. If you are only going to fish one tournament, this is it. 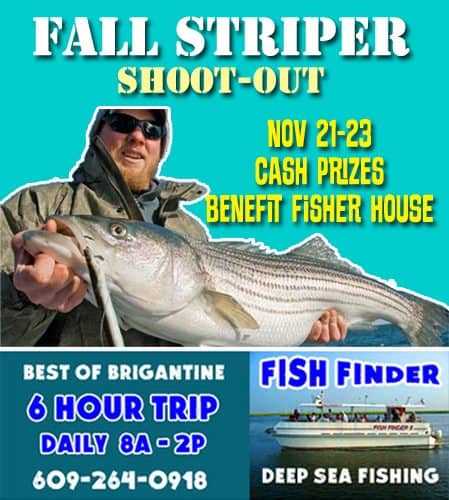