After 12 years of Catholic school, we’re pretty sure Brigantine Councilman Vince Sera once again, broke the 8th Commandment. Thou shall not lie. Thou shall not bear false witness against thy neighbor.

Mr. Sera, hoping to retain his Brigantine council seat, decided to bear false witness against his neighbor / political opponent, Jerry Szucs. What better way to do that, than to make the accusation that he was attacked for his faith.

As a Brigantine Green Head politician, anything goes. Even during church services.

Here’s what happened: Following the recent 11a mass at St. Thomas Church, candidate Jerry Szucs approached candidate Vince Sera in the parking lot. After a few pleasantries, Szucs brought up a matter that most found disturbing and offensive. “Why is Sera politicizing Sunday mass? Why did he pay to have an advertising display truck in the middle of St. Thomas parking lot?

How dare someone question ‘holier than thou’ Vince Sera. God forbid.

Side note: we find it amusing that Sera opens most Brigantine Council meetings with a prayer. After AMEN, Vince removes his halo and gets down to business. He votes for expenditures and actions not only harmful to taxpayers, but stuff that could ostensibly be seen as ‘stealing’ from the public. See: School district scam shutting down Sea-Tots pre-school, private dune destruction, over-taxing 2nd homeowners, etc. 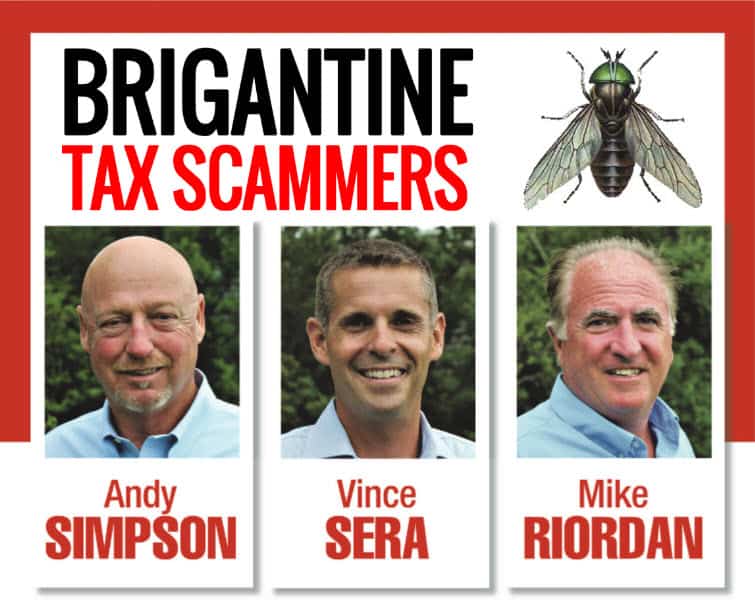 The political team of Vince Sera, Mike Riordan and Andy Simpson, sensing a potential election loss, paid for a digital AD truck to drive thru St Thomas’s Church parking lot. The vehicle spent much of Sunday morning driving back n forth between WAWA & St Thomas on 8th Street.

The Sera / Szucs conversation was civil. Plenty of onlookers can vouch for that. Sera said he’d ‘look into’ it. Not true. Sera said nothing. How dare someone question his actions. Sanctimonious Vince walked away in a huff.

What does a grown man like Vince do when dealing with respectful opposition or disagreement? He posts a vile, completely false account of the Szucs discussion….on Facebook. Then he sends a false report to the local newspapers. Classy & mature. Pure Green Head Politics from Saint Vince.

Kudos to The Brigantine Times for NOT printing this garbage. 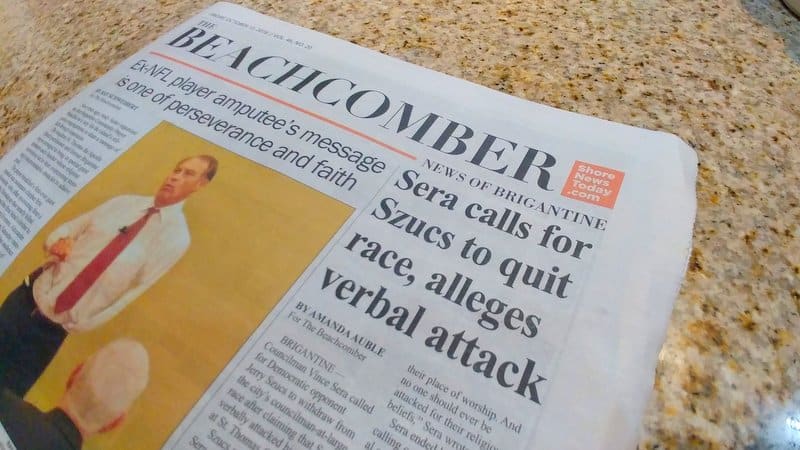 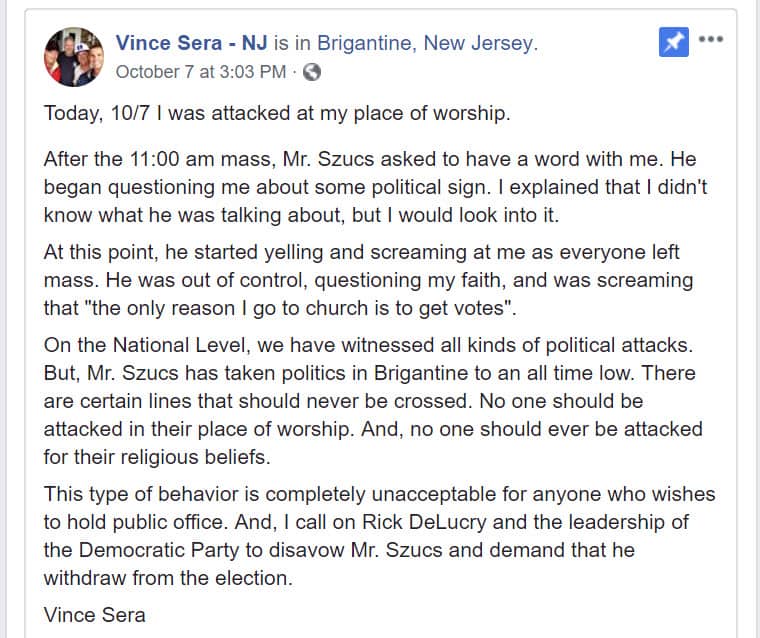 Did Sera and Simpson get permission from St. Thomas? Sera ignored rules of NO POLITICAL ADVERTISING on church grounds.

Sera and Simpson saw it as a good way to display partisan political ads to parishioners attending Sunday mass at St. Thomas Church.

Sera claimed the truck driver only parked the vehicle on the Church parking lot in order to cross the street and use the WAWA bathroom. Of course, Sera regrets telling that whopper of a lie. The driver could have used the church bathroom. And…. the 8th street WAWA doesn’t have a bathroom.

Szucs reminded Sera it was wrong to bring politics onto church property.

Councilman Vince Sera and (always creepy) Andy Simpson, decided to spin this in their favor. The dastardly duo reached out to their friends at the Press of Atlantic City. Specifically, Amanda Auble, of the Brigantine Beachcomber newspaper. She made this non-story a front page headline.

The conversation was a civil one. Plenty of onlookers can vouch for that. Sera said he was unaware of the Digital AD truck in the Church parking lot, but he’d look into it.

Was Amanda Auble coerced by Sera to post a totally fabricated story? Is the Brigantine Beachcomber that desperate?

Sera claims to be a victim of religious persecution. #BelieveVince. We may need to set up a GoFundMe page for Vince. Dude needs a safe space…..asap.

Vince Sera is following in the foot steps of Brigantine Mayor Phil Guenther.

Vince sees himself as a ‘good Catholic’. Yet Sera consistently hides the truth about fiscal malfeasance within Brigantine City Hall. Vince looks the other way when Mayor Guenther and creepy councilman, Andy Simpson do dirty deals that hurt the average Brigantine taxpayer. Especially 2nd homeowners.

Szucs: Mr. Sera and his running mates blatantly and shamefully brought partisan politics into a sacred space. I called Vince on it.

We assume Rev. Ed Maher at St. Thomas was embarrassed. He said the church had ‘no comment’ on the situation.

MyRiteLoad owns the digital advertisement truck. They claim the driver parked in the church lot to use the (non-existent) bathroom at nearby Wawa.

Brigantine Greenhead loyalists came out in force to protect their councilman. The usual suspects blindly pledged allegiance, even if they didn’t attend Mass that Sunday.

Below: Miss Linda Wynkook took the opportunity to pour on some Facebook BS. Linda took it up a notch by proclaiming Saint Vince had his right to worship violated.

Nothing worse than someone hiding behind and disrespecting a religious organization. Shame on Sera. Eyewitness reports clearly show Sera had a short conversation with Szucs in the church parking lot AFTER the service. Sera falsely claimed he was attacked for his religious beliefs. Crazy talk. Of course, Szucs is a practicing Catholic as well. Sera forgot to share that piece of info.

As a Catholic, BrigantineNOW is forgiving. We suggest Vince Sera spends a little time in the confessional.