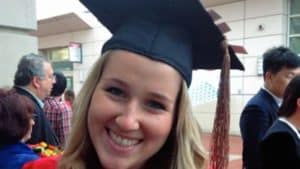 UPDATE on a heartbreaking & tragic event. On May 16 of this year, Lizzy Scotland of Brigantine fell two stories down an elevator shaft at Fenway Park. The 22 year old Boston University was seriously injured. Lizzy is the daughter of Rev. John Scotland of the Presbyterian Church. The family is suing owner of the Boston Red Sox and the OTIS elevator company.

Attorneys for Scotland filed suit this past Wednesday in Superior Court in Boston against Fenway Sports Group and Otis Elevator Co. of Farmington. The suit seeks unspecified damages. The lawsuit says Scotland fell when a closed elevator door opened when she brushed up against it, and she suffered a traumatic brain injury, spinal injuries, facial fractures and dental damage.

WATCH VIDEO BELOW from WBZ-TV in Boston.

According to WBZ-TV Boston, the lawsuit claims Scotland was waiting for the elevator on the fourth floor of the ballpark when she brushed up against the closed door. It swung open; she lost her balance, slipped into the shaft and plummeted two stories landing on top of the elevator car. Scotland suffered severe brain and spine injuries along with facial fractures and dental damage.

Scotland has already accumulated more than a quarter of a million dollars in medical expenses. See WBZ-TV Boston Story Here

The Red Sox had no comment, but said Fenway Park elevators are safe. The Red Sox wishes Scotland well. Otis Elevator officials are reviewing the lawsuit.

The staff of BrigantineNOW hope for continued recovery for Lizzy. Ms. Scotland and family are in our prayers.