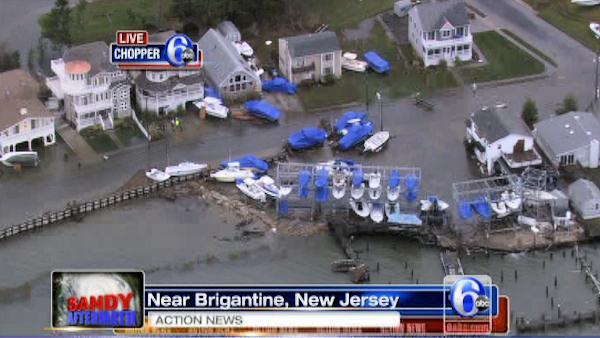 Hurricane Sandy flooding in Brigantine (and many places along the Jersey coast) was a result of tidal surge along the back bay. Water overflowing too low bulkheads, or no bulkheads at all.

Should Brigantine put more focus on bulkheads, in addition to house raising?

According to a Beachcomber News report from last summer, this prickly issue has pitted neighbor against neighbor. Councilman Joe Picardi noted Gov. Christie’s recent executive order dealing with protective dunes and suggested that the issue was “private interest vs. public safety.” Members of council have anticipated that the issue will affect bayside homeowners who do not have the financial ability to correct any deficiencies with their bulkheads.

The Beachcomber story from Oct 8, 2013 continues: John Butler, of E. Shore Drive, suffered flood damage from Sandy. Butler plans to rebuild, and would like to keep the boat ramp that has been there more than 40 years. Before he can rebuild, the bulkheads need to be replaced. Butler asked the city to approve a bulkhead cutout for the boat ramp. He requested that he be allowed to install a flood gate and have the cutout at “elevation 7.”

City Engineer Ed Stinson told council that it would be preferable if the elevation was raised to 8 feet. Council agreed to allow Stinson and Butler’s engineer to come to an agreement, with the understanding that Stinson’s decision would be final.

But what about bulkheads?

The bayside of Brigantine is bulked up with bulk-headed. 95% of are privately owned. Approximately twenty properties don’t have any bulkhead at all. Some bulkheads need repair. About 40% are at 6 footers, which was the standard height of bulkheads in the 60’s and 70’s. Today, the mandatory height for new bulkheads is 9 feet along the bay. Alas, not enough to stop Sandy, which saw a 10 feet. back bay tidal surge. Many say 9 feet is acceptable.

All private bulkheads within the City of Brigantine must be maintained in such a manner so the same are not injurious or dangerous to the health, safety or welfare of the citizens of Brigantine. Said bulkheads shall be kept in such a state of repair so as to maintain the filling in of land around and about said bulkhead to the grade above the mean high tide level as established for Brigantine and shall also be maintained to prevent erosion or damage to abutting, adjacent or adjoining properties. Any person or entity who violates this section of the Code of the City of Brigantine may be subject to a fine not to exceed $1,000 or jail time not to exceed 90 days, or both, in the discretion of the Municipal Court Judge of the City of Brigantine.

When storms and tidal flooding hit Brigantine, water quickly gushes through properties with no bulkheads. The city dock and the boat ramp are two of the biggest problem areas. The city seems to be making some progress with addressing those two sites.

Unfortunately, privately owned water-front properties with no bulkhead, or a minimal 6 footer, can’t handle modern day storms. Should these waterfront property owners be offered some type of low or no interest loan or grant to raise or build their own bulkheads? Some think it’s worth considering. Currently, there is no program to assist these property owners.

Tom Morgan of Brigantine Times said: It just doesn’t make any sense to have a bulkhead system with gaps or inadequate structures. You can get money to raise your house, but nothing to assist with actual bulkheads that stop flooding.

Should Brigantine upgrade their bulkhead ordinance? A new bulkhead will set you back $50,000. Properties with no bulkheads are not required to install one. In August 0f 2013, city engineer; Ed Stinson, said Brigantine was looking into changing the bulkhead ordinance, with something like the following:

• Require any property with no bulkhead, to install a 9 ft. conforming bulkhead
• Require all bulkheads to be at least 9 ft.
• Do nothing until a new home is built on that property.

Why no program to help home-owners with new  improved bulkheads?

Some argue it’s better to raise a house. Brigantine Times writer Tom Morgan laments: the island is almost completely bulk-headed now and when the tide gets high, water pours through certain areas with no bulkheads. Affected homeowners, tired of regular flooding, are looking for answers.

Yes, the city says it will handle the city dock, boat ramp and a few other areas. But inadequate or lack of bulkheads on private land, will continue to be the weak link in the chain of this soggy seaside story.

Keep up with the battle of the bulkheads….  BrigantineBulkhead.com

2 thoughts on “Bulkhead Battle on the Back Bay of Brigantine”